The major proto-urban centres of the early medieval world in Northern Europe such as Hedeby, Ribe, Birka and Kaupang, possessed a specifically favourable traffic-geographic situation, were situated in borderlands and could attract many merchants from sometimes far-distant places, resulting in considerable economic prosperity. Even their denotations in the contemporary written sources partly overlap. The way in which the written sources label these kinds of trading places has long been the matter of academic discussion and is immediately connected to the vast field of “early stages of the European town” and urbanisation in Central and Northern Europe in general. Apart from the process of the Christianisation of the North, there is hardly any other topic that has been debated as intensively and controversially within the field of Early Medieval archaeology and Viking age studies. Hence, it is not a coincidence that there still seems to be no generally accepted, straightforward interpretation. There seems little use in introducing yet another term to an already bewildering academic discussion. It is unlikely that one more suggestion, one more denotation for the first sparks of the urban phenomenon in the North, manifested by four recognised sites only (sic!), will bring us any further in the future debate of this major field of research in Scandinavian Early Medieval archaeology. It may even be raised the heretical question if our main concern is still a question of terminology. 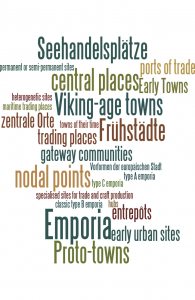 Regardless of their academic denotation, the issue of what these places were about remains as primary as the problem. But what apart from the mere “trade and production” as commonplace is at the very core of that discontinuous phenomenon of the dawn of high medieval towns that these very special sites constitute? It might be about time to shift the emphasis from a mere what? (towns) or how? (networks) to a more elaborate why? Obviously that answer cannot be achieved by focusing on the early urban centres only. It requires nothing less than a sincere holistic approach: A thorough examination of the societal framework of the circumjacent ordinary world, mirrored in a super-regional comparison with Anglo-Saxon England, Continental Europe as well as Byzantium and lastly – since we are dealing with protohistoric archaeology! – an inclusion of the sparse but not less important information from chronicles and legal texts. What sounds like a vast investment in research is indeed quite achievable since most of the jigsaw pieces have been known for quite some time within the scientific debate. It is on us to place them out into one coherent picture. In light of the evidence, the implementation of the concept of “special economic zones” seeks to contribute to helping understand the specific nature and function of these very distinct sites for the traditional Viking age society at the earliest stage of urbanism in Northern Europe.