In April to October 2017 a larger section of Hedeby’s Flat-Grave Burial Ground (Flachgräberfeld; Busdorf, Kreis Schleswig-Flensburg; LA No. 31-3; excavation ALSH 2017-32) was subject to an archaeological investigation. The declared aim of this research-excavation was to relocate the exact position of an earlier, unfinished excavation trench from the eve of World War II, an enhancement of a larger section immediately around it for a modern, state-of-the-art investigation of the burial ground including aDNA-extraction, and finally a monitoring of the present-day preservation conditions for human remains.

The excavations started off with a 12.5 x 12 m large trench roughly centring on the 1939-trench. Observation conditions were hindered due to a very heavy bioturbation caused by resident moles and root voles. Most of the features were about ENE-WSW orientated graves with nailed coffins and without grave goods. The overwhelming majority, however, did not feature preserved human bones. It was attempted to compensate this circumstance methodologically by a consequent soil sampling at the bottom of the grave-pits in hope to catch some putrid juice suitable for aDNA-analysis. Also from three of the main profiles soil samples were taken for further soil-chemical analysis in order to follow up the question for the prevailing erratic preservation conditions. A minor supplementary trench of 3 x 5 metres was opened next to the main excavation area from 1900-1912. Here, the preservation conditions proved to be far better. 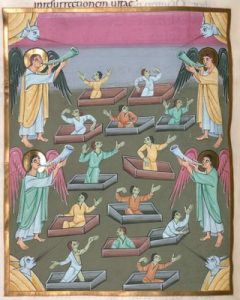 All-in-all, 69 features were recorded during the excavations. The encountered artefact-spectrum was vast and the finds reach as many as 12,000 entities. For the moment post-excavation work as e.g. digitalisation, GIS, aDNA- and material analysis are ongoing.